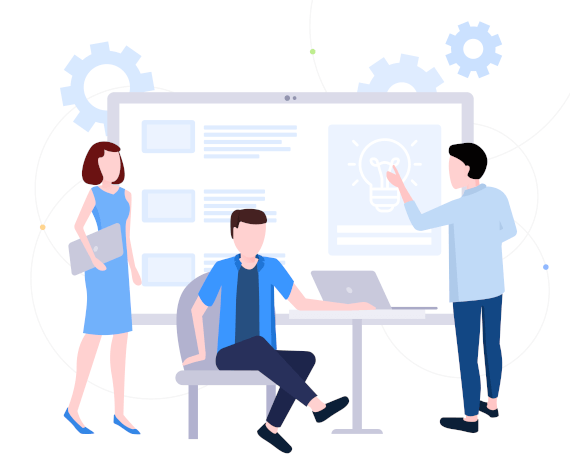 Transitioning software from its inception through various phases of development is a complex process that requires a collaborative multidisciplinary effort. One common factor identified as the cause of failure of several IT projects is an inefficient software development team structure. This problem highlights the need for clearly defined roles where each role has outlined responsibilities. More than a rigid, hierarchical structure, what really matters is to assign clear ownerships and promote efficient collaboration. As compared to a traditional development team, there is increasing adoption of an Agile team structure that enables greater collaboration and a flexible approach to develop software. In this article, we delve into how an Agile team differs from a traditional structure, along with exploring common software development team roles and responsibilities

The traditional approach to software development is a step-by-step process that needs one stage to finish before the next can start. While doing so, the team typically maintains the defined order and hierarchy of the workflow, where any deviation is handled as an exception that follows a rigid approval cycle. On the other hand, the Agile method is a more iterative and flexible approach that leads to the advent of more adaptable self-managed teams.

Some other common differences between Agile and Traditional software development team roles and responsibilities are further elaborated on below:

Although both traditional and Agile team structures differ in the way they operate, both models comprise individual roles that are mostly common. In the sections below, we discuss the most common roles of a software development team structure.

Who are the Members of the Software Project Development Team?

Following are the most common project team roles and responsibilities in a typical software development team structure:

In an Agile team structure, the product owner represents both end-user and business stakeholders while making product decisions. For the reason that a product owner juggles representation across both internal and external parties of a software project, the role requires the individual to have an in-depth understanding of business goals as well as user experience.

Some common responsibilities of a Product Owner include:

Some common responsibilities of a Product Manager/Scrum Master include:

One of the key roles of a software development team is that of a Business Analyst(BA) who is engaged from the initial stages of the development cycle till receiving a successful sign-off from the client. It is the BA who drives initial due-diligence, requirements gathering, and gap analysis to make assumptions and generate an understanding of the clients operating model. As a result, the role requires an individual with a multi-faceted understanding of the business from a technical, financial, and economic viewpoint.

Some common roles and responsibilities of a BA include:

Once requirements are identified by the Business Analyst, the Software Architect takes over to design the technical architecture. The software architect is responsible for identifying the right tech stack, designing the platform, architecting application layers and outlining coding standards. As a prerequisite, a Software Architect must possess extensive hands-on coding experience, knowledge of software architectural patterns, insights into emerging technologies and deeper awareness of Governance & Policy requirements.

Some common roles and responsibilities of a Software Architect include:

At the core of a software development team are the Software Developers - those who are responsible for translating features and requirements into lines of code that make up the software. Developer roles can be classified into two groups depending on what part of the software they develop.

Frontend Developers are responsible for developing the visual layer of the software with which end-users interact. While one of their core areas is to develop the interface of the software, they also need to be considerate and knowledgeable on how the frontend communicates with other layers, including middleware and backend, of the software.

Some common responsibilities of a Frontend Developer include:

Some common responsibilities of a Backend Developer include:

DevOps is a software development methodology that enables efficient collaboration among development and IT operations. By implementing DevOps best practices, organizations embrace finely-optimized automated workflows that are cost-effective and highly efficient. It is the DevOps Engineer who implements DevOps practices, introduces methodologies and tools that enable automation to support continuous integration and delivery.

Some common responsibilities of a DevOps Engineer include:

In most cases, the success of an application is attributed to the ease and efficiency of the user experience - that results from a cross-combination of frontend, middleware and backend components of the application. Designing user experience is a user-centric process that focuses on creating a seamless functional experience of using the software application. To help with this, User Experience Designers (UED) identify such usability experiences the end-user gets while interacting with the system. A UX Designer formulates a detailed analysis plan to help design easy-to-use navigation and frontend interfaces. It must be noted that the role of a UX Designer is to identify best practices and define the user experience rather than developing those.

Some common responsibilities of a User Experience (UX) Designer include:

User Interface Design is often an extension to the User Experience Design process. After the UX Designer identifies and issues guidelines on how users interact with the application, a UI Designer develops an aesthetically pleasing user interface for software applications. It is the User Interface Designer who is responsible for developing the graphical interface of the software end-to-end.

In certain team structures, a UI Designer’s role might be redundant with that of a Frontend Developer, though most teams prefer to have both roles. While the Frontend Developer focuses on developing the presentation layer that binds the user interface with the backend layers of the application, the User Interface Designer possesses graphic designing skills to develop frontend elements. A more detailed article on how the two roles differ can be found here.

Some common responsibilities of a User Interface (UI) Designer include:

Testing is typically considered the last step of an SDLC before the software is finally deployed to production. Before doing so, the software needs to be tested to ensure that it is functional, behaves as expected, does not contain security vulnerabilities, and meets business requirements. Quality Assurance Leads or Software Testers are responsible for testing the application through multiple stages of the software's lifecycle with the intent of finding failures and verifying that the product is fit to use.

Some common responsibilities of a QA Assurance Lead/Tester include:

Developing software is a complex undertaking that requires a wide range of skills. To do so, organizations may take either the traditional or the Agile approach to forming a software development team. Both of these structures differ in - the level of flexibility they allow, the amount of transparency and ownership, and the problem-solving style. As an Agile model offers greater control and closer collaboration among team members, it is steadily gaining popularity over a traditional team structure.

Regardless of the approach taken, the goal at the end is to develop software applications that are efficient, secure and easy to use. At Enkonix, we take pride in having helped multiple organizations as their trusted vendor for software development. While acting as an extended team for such organizations, we do all the required leg work of forming the right team, following the right methodologies, and adhering to policy standards. To know more about how Enkonix can help you develop and maintain your software lifecycle, contact us here.

You’re one email away from putting that project to work. Send us a note